A walk down memory lane was due today, with the Ray of Light album turning 20 years old!
I’ll leave the others reminding you how great the combination of Madonna + Orbit was on every track of the album while I just picked and played with some of “Ray Of Light items” from our private memorabilia collection while listening loud to the album, and honestly I almost forgot some of these…

When the album was first released worldwide in 1998 there were lots of limited editions of the CD, many of them were official releases coming from Asia, and as the mad completist I was at the time I tried to track down most of them and here they are: Limited CD with Postcards from Singapore, Limited Double CD  with Interview disc from Malaysia, again from Malaysia a rare Gold CD, a rare Silver CD made in the USA for the Thai market.
[listening to Drowned World and Swim while looking back at these]

Then the official Ray of Light Limited Edition, the (in)famous lenticular digipack edition. It still glows like day one!
[listening to Ray of Light while looking at this item]

Then I remembered that not only I did bother all the record shops in Rome to convince them to hand me the big cardboard standees that promoted the album in their windows, but that I eventually also got these little counter  standees with the same layout. Still happy to have them!
[listening to Candy Perfume Girl and Skin while looking at this item]

When the Ray of Light video was released on MTV, Warner Music in the US decided that  the videoclip was so artistic that it deserved a commercial video single just like Justify My Love (that was the first commercial video single ever made). So basically they released the Ray of Light video, on VHS tape, coming inside a black stickered cardboard sleeve. The front silver sticker had the ROL logo and to make it even cooler, each copy came with a numbered card to stress the concept this was a limited release.
[listening to Nothing Really Matters and Sky Fits Heaven while looking at this item]

With Frozen as the leading first single, one of the most saught after promo items at the time of release was this Henna Tatoo Kit. Everything you needed to look like Madonna in her Frozen video was included in this little box – well almost everything.
[listening to Shanti / Ashtangi and Frozen while looking at this item] 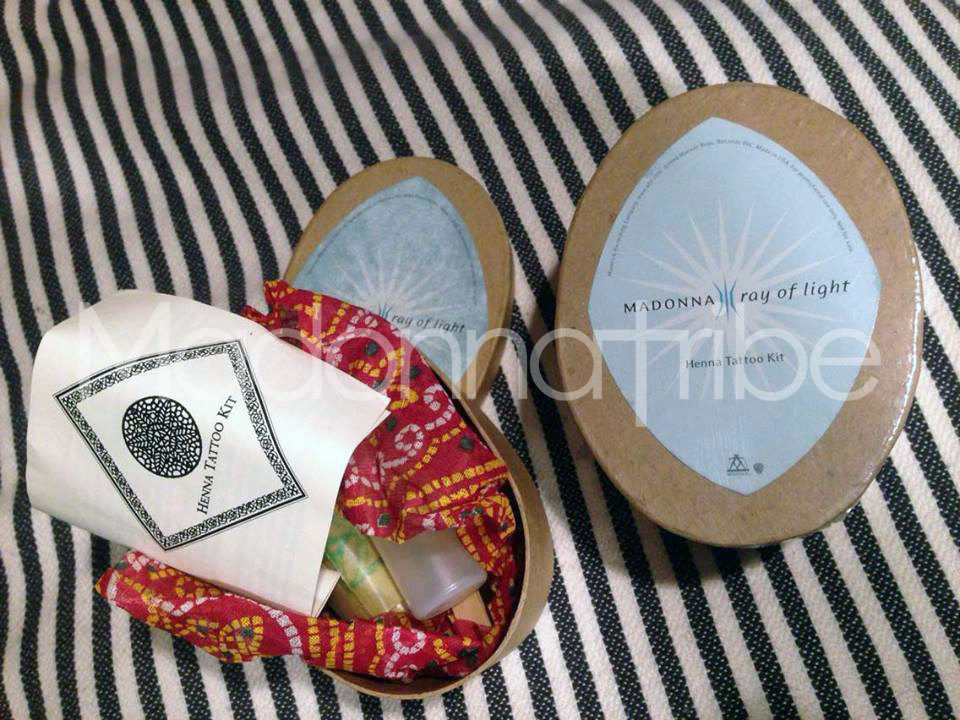 Even though this item is a shameless bootleg I will not ever have the power to kiss it good-bye. An amazing 12″ picture disc
of the album, coming in a great custom die cut cover and carrying a “made in the usa” note on the back sleeve, even though
I’m more convinced this disc is “talking Italian”!
[listening to The Power of Good-Bye and To Have and Not To Hold while looking at this item]

There was a time people used to listen to album on cassette, and in 1998 you could still do it! So here’s the tape edition of Ray of Light.
[listening to Little Star and Mer Girl while looking at this item]

Last but not least, the Japanese Edition of this album, the first one to come out on this day 20 years ago and also one I’m listening to now. It came with extra track Has To Be, that at the time of release was exclusive to this edition.
[listening to Has To Be while looking at this item]

Ok going to put all these items back in the vault, I hope you enjoyed this trip with me and HAPPY 20TH BIRTHDAY ROL!!!