“There’s quite a story around that”

In more Ray of Light turning 20 celebrations, Matthew Jacobs from the HuffPost discusses what Gianni Versace‘s death tells us about Madonna‘s 1998 renaissance, discussing her footpath from Bedtime Story to the Ray of Light era.

“Traveling, traveling / In the arms of unconsciousness,” Madonna cooed on the Björk-assisted single Bedtime Story, released in 1995. Overexposed and castigated after the ruckus surrounding Erotica and the carnal coffee-table book Sex, she’d forged a reverie about disconnecting from reality. “Today is the last day that I’m using words / They’ve gone out, lost their meaning.”

But by 1998, Madonna had awoken again. On Sky Fits Heaven, the seventh track from the enlightened electro-rock masterpiece Ray of Light, she repeated a familiar phrase ― except here it ended on an upbeat: “Traveling, traveling / Watching the signs as I go.” This time, pop music’s doyenne of reinvention was anything but unconscious.

Her footpath from the Bedtime Story era to Ray of Light, which turns 20 on Feb. 22, places Madonna at the nexus of celebrity culture circa 1997 (when she spent five months writing and recording the album) and early 1998 (when she released and promoted the album, which went on to win four Grammys and six MTV Video Music Awards). Nearing 40 and competing with a fresh generation of A&R-packaged teenyboppers, Madonna had risked aging out of mainstream stardom, one of the many sectors of society that isn’t kind to mature women. Instead, the ambient fizzes and mystical flurries on Ray of Light formed a cutting-edge benediction that rehabilitated Madonna’s image ― a coup few legacy acts could hope for today. She was a new mother, animated by Kabbalah and Hatha yoga, but uninterested in maternity leave.

Madonna’s late ’90s eminence can be further distilled through one morsel about the creation of Ray of Light, her seventh studio disc: On July 15, 1997, the day she recorded the gritty meditation Swim, Donatella Versace called Madonna to report that her brother Gianni had been shot outside his Miami mansion.

William Orbit, the English producer who helped shape Ray of Light, has related this anecdote at least twice. The first time was in 1998, during an interview with Music Week.

The day she [recorded Swim] she got a call on the way to the studio that her next-door neighbor Versace had been murdered. Lyrically it was written before that, but it is topical.

We were recording Swim on the day Versace was murdered. Madonna was very friendly with him and his sister, Donatella, who was in the street, distraught, on her cellphone to Madonna. But she did the vocal, which is probably why it has such an emotional impact.

Earlier this month, I emailed Orbit to ask for more details. “There’s quite a story around that,” he confirmed, declining an interview in the same breath. Representatives for Madonna and Donatella Versace did not respond to my inquiries.

Madonna was famously chummy with the Calabria-born Versaces, first posing for their fashion line’s ad campaign in 1995 when, as Orbit indicates, she and Gianni both owned townhouses on 64th Street in Manhattan (though they weren’t next door to each other). A month and a half after recording Swim, she penned the couturier’s eulogy for Time magazine, recalling, among other lavish details, the days she borrowed his well-staffed Italian villa. “I’ve got a pocketful of memories in my Versace jeans, and they’re not going anywhere,” she wrote. 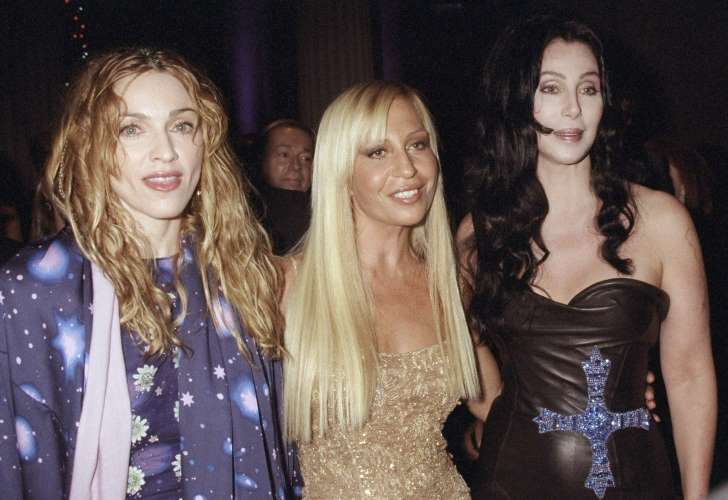 On the surface, as it relates to Ray of Light, Versace’s murder at the hands of spree killer Andrew Cunanan is an ill-timed coincidence. Madonna didn’t compose Swim in response to Versace’s death, but she had to perform it ― an anthem about the world’s “sins” ― on the day one of her most famous friends informed her that another of her most famous friends had lost his life. Madonna grieved in the studio, just like you or I must still show up to the office after awakening to bad news.

These events positioned her, however privately, at the center of an international tragedy ― just as she was throughout the AIDS crisis, when, for example, she crafted the Erotica ballad In This Life, dedicated to her longtime chum and collaborator Martin Burgoyne, who’d died from the disease in 1986. Of all people, Donatella thought to call Madonna, a celebrity among celebrities, with the news of her brother’s scandalous death. And what episode of Madonna’s career better fits that narrative than the one dedicated to her spiritual fortification?

“Put your head on my shoulder, baby / Things can’t get any worse / Night is getting colder / Sometimes life feels like it’s a curse,” Madonna croons on Swim, which opens with a melancholic serenity and settles into a guttural anger that’s impossible to underestimate even without knowing Madonna’s mood on the day of its recording. Swim is one of the few Ray of Light tracks that doesn’t offer a glimmer of Zen in its heady rumination, so Madonna instead follows it with the glittering title song, whose lyrics become a salve: “Zephyr in the sky at night I wonder / Do my tears of mourning sink beneath the sun? / … / She’s got herself a little piece of heaven / Waiting for the time when Earth shall be as one.”

Life will go on, despite the country’s anger at her provocations, despite Versace’s demise, despite the fact that the music industry is stacked against luminaries reaching arbitrary sell-by dates after being crowned American royalty when they were dewy teens or 20-somethings. (To that last point: Madonna had a Top 10 hit as recently as 2012. She was 54! Almost none of her peers can claim that feat at such an age.)

In fact, the entirety of Ray of Light feels like a renewal following some kind of death ― a tangible loss of her youth, a fleeting sense that her yearning to get into the groove had faded. (It would soon return, of course, because Madonna is nothing if not an expert in brand management.) That’s why her existential primping ― “Nothing takes the past away / Like the future / Nothing makes the darkness go / Like the light,” she sings on Nothing Really Matters ― further acts as a metamorphosis. Her interior life was laid bare, and the results were an extended tone poem.

But here’s something else that strikes me about this album: Even with a track that morphed into a response to a fellow artist’s death, Madonna didn’t find it as personal as the rest of us did. Because its lyrics were more sophisticated than, say, Holiday or Lucky Star, the fawning reception implied that the dance-floor invitations on which she’d built her career were too fluffy to be taken seriously ― a tired, vapid, persistent appraisal of female-fronted pop.