Madonna on Têtu: Madame X’s Political Power and Being a Gay Icon

The online website of Attitude, the UK’s best-selling gay magazine, features a story about the exclusive Madonna interview published on the new issue of French LGBT magazine Têtu, which hits the newsstands today, 22 May.

Madonna has insisted that her upcoming record Madame X is her most politically-charged since 2003’s American Life and reveals she is “frightened” by the current political climate but that she hopes her new material will help “inspire people to act.”

Asked whether she is scared, angry or fed up with the state of the world, Madonna replies (translated from French):

All those feelings you mentioned. I’m scared. Frightened by so many things going on in this world. As you are I’m sure.

But I’m also optimistic. I think the future is full of possibilities. And I hope I was able to channel my anger and my rage in order to create a music full of joy.

To me, in many ways, this album is the continuation of American Life.

If you’re a narrow-minded person using provocation, then your message will be narrow-minded. It depends on the intention of the provocateur.

I don’t see the world through labels and categories. But society loves to categorise, label and separate people: the poor, the gays, the Africans… Because it make us feel safe.

About how she feels about being regarded as possibly the world’s great gay icon, and whether it’s a title she ‘claims’:

I think it’s weird to call myself an icon. I feel blessed to have a voice, and to be able to use it to help people don’t have one and to fight for the rights of those who are not heard.

I think the word ‘icon’ is a word that other people can give you. But I can’t claim it for myself. Do you think I’m an icon?

Told she’s the very “definition”, Madonna replies: “So if you think I’m an icon, then I am one!”

The new issue of Têtu is out now. Read the Full Story on Attitude.co.uk. 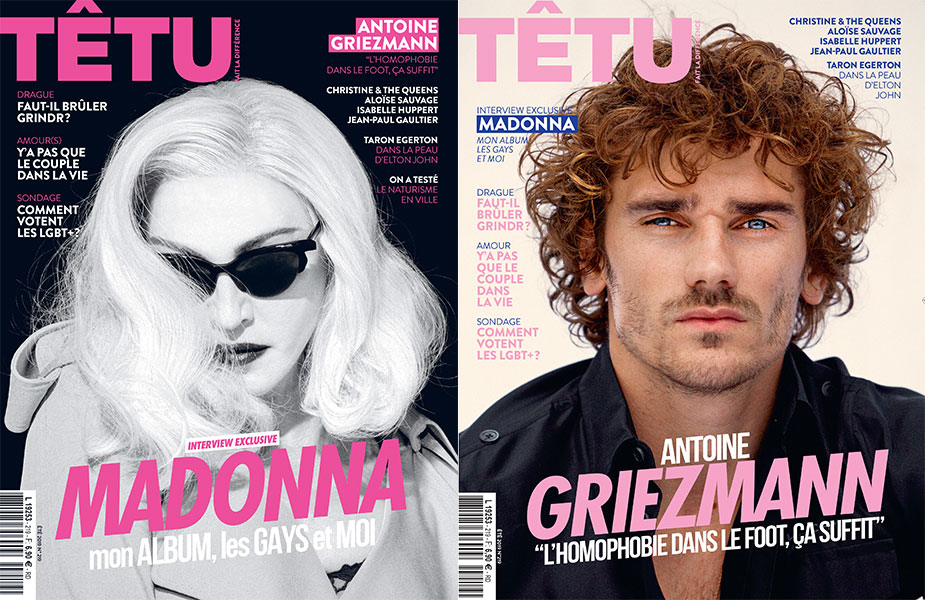 The two covers of the new issue of Têtu.