Variety.com is another media outlet reporting on Madonna‘s 30-minute concert closing a week of festivities for World Pride, which included the June 28 commemoration of the 50th anniversary of the Stonewall riots and the gay liberation movement.

Speaking on Sunday night in Manhattan to a crowd of 7,000 fans, Madonna said:

We have been on this journey together, and I am so proud and honored to share this historical evening with you. Are you with me? Are you proud? So am I. It’s like I’ve been waiting my entire life for this moment.
You really don’t know, you really don’t know.

Since I came to New York as a wee-little girl, I have always been embraced by Queer Nation. I always felt like an outsider but you made me feel like an insider, like a somebody. That it was ok to be different. So you must know how much I love and appreciate everyone here tonight. All members of the LGBTQ community.
Thank you from the bottom of my heart.

Among the hands waving in the air were such notable attendees as Donatella Versace in the VIP booth, CNN president Jeff Zucker, comedian Billy Eichner and Pose actor Billy Porter.

Although Madonna’s set was short, as is tradition for the annual circuit party on the pier, it did reveal some glimpses of what her upcoming Madame X Tour could entail. After a pre-recorded video explaining how Madonna’s alter ego was a secret agent with a series of identities such as “a dancer, a professor, a head of state, a housekeeper, an equestrian, a prisoner, a student, a mother, a teacher, a nun, a singer, a saint, a whore, Madonna emerged onstage flanked by at least a dozen dancers, all dressed like her, in spy jackets. But only the real Madonna wore a sparkling patch over her left eye and a leather coat, launching into a performance of one of her greatest hits, Vogue. She followed the classic with a guitar-led rendition of American Life.

Before segueing into a partial costume change, kicking off her stiletto heels for a pair of combat boots:

Her combat boots came courtesy of the house of Versace, that created the outfits for Madonna and her platoon of dancers and musicians. Details were shared on their official Twitter profile: 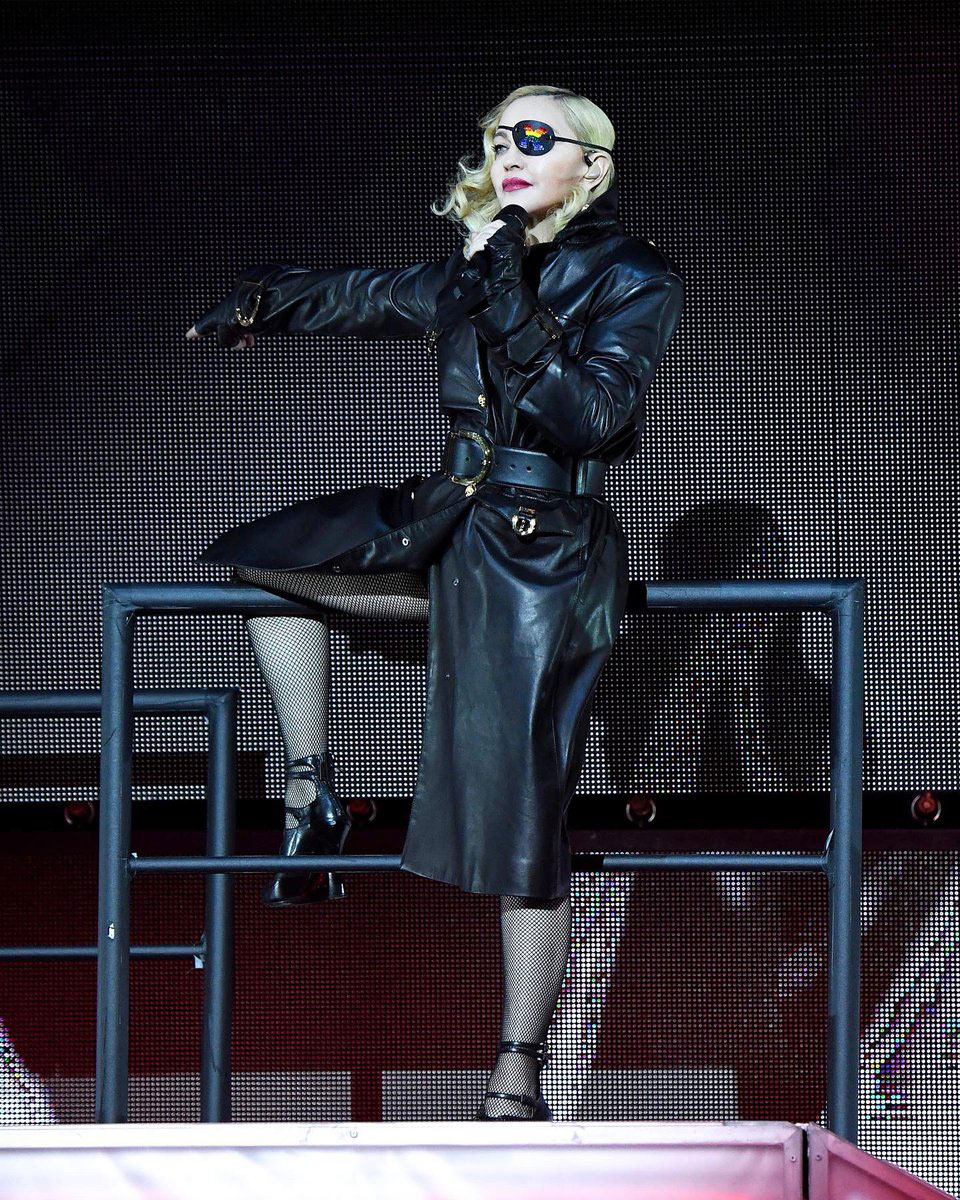 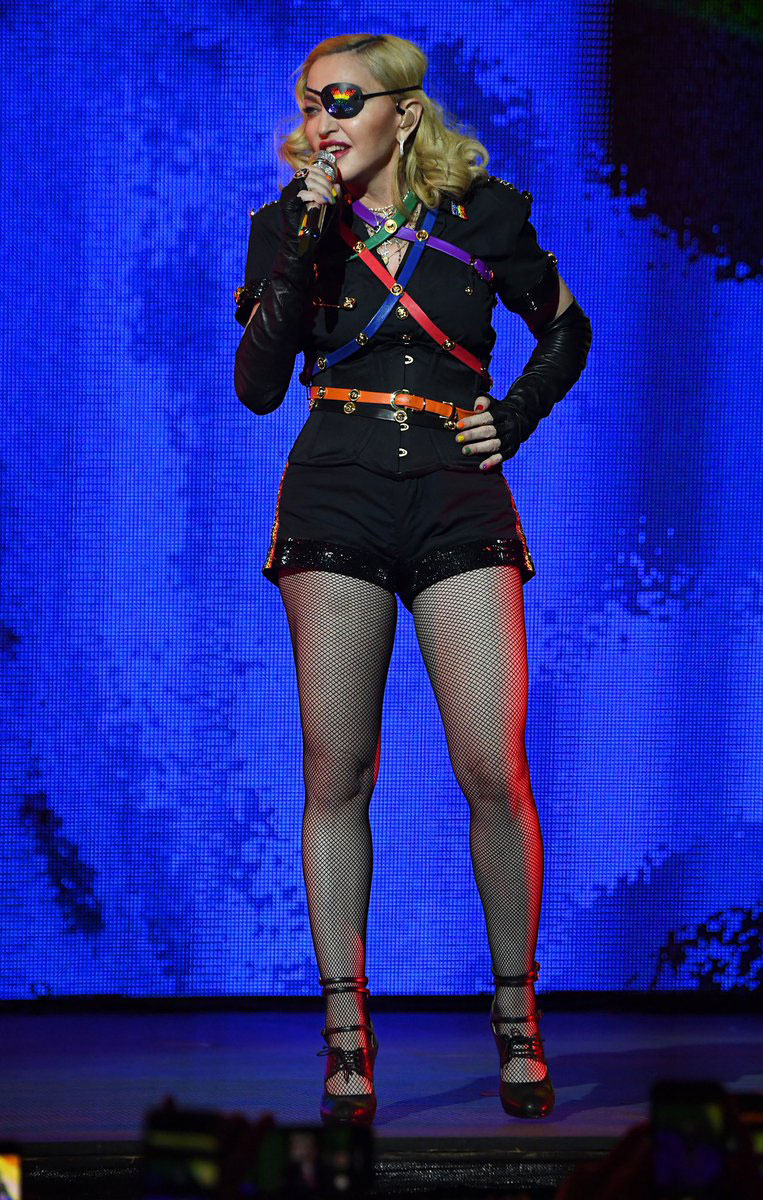 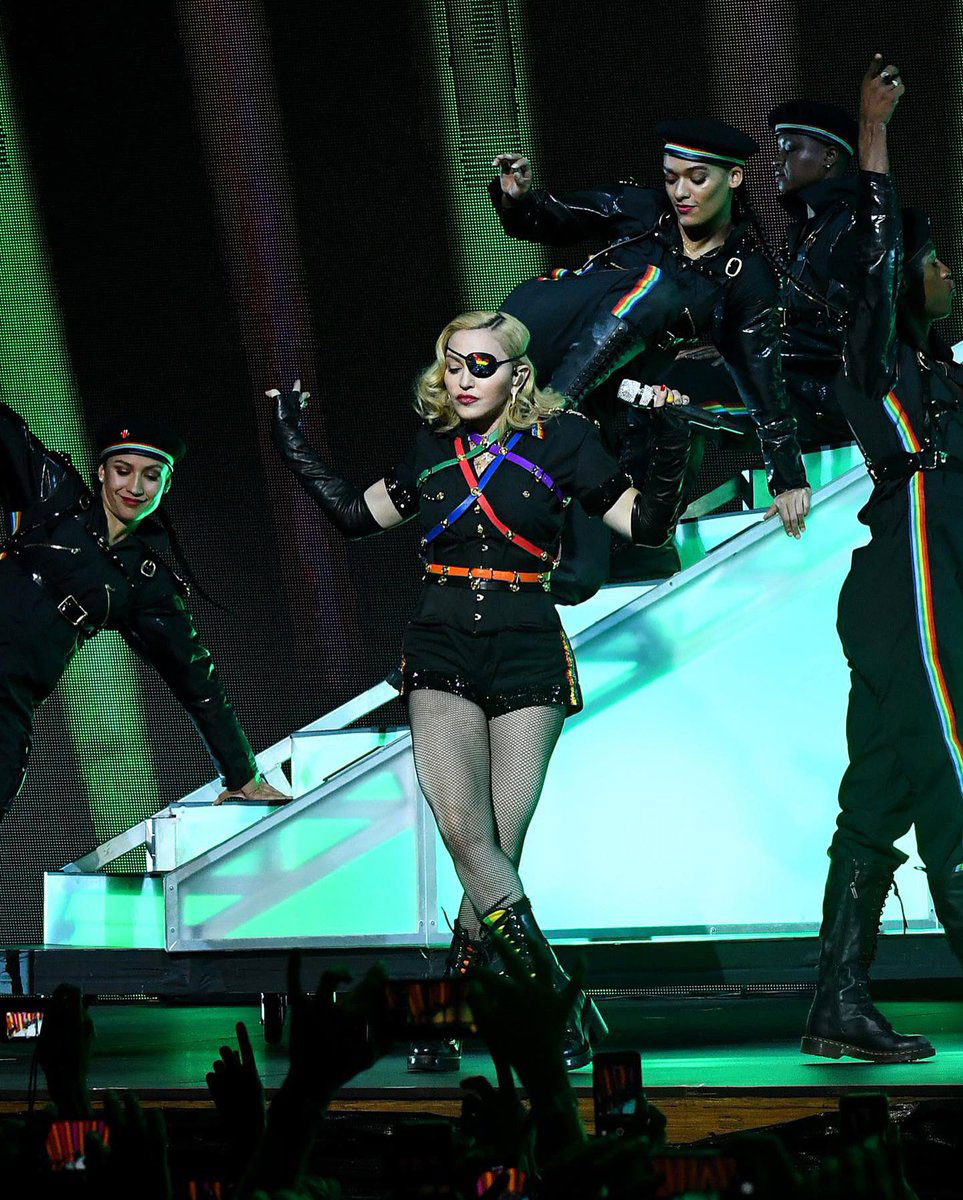 The second half of Madonna‘s performance consisted in new material, which featured two of her more political messages and themes from Madame X. Speaking to the crowd, she said that the biggest problem in America is “gun safety and gun control which is disproportionately affecting marginalized communities.”

That led to Madonna performing her song, God Control, which featured her background dancers dressed as police officers wielding combat shields. Her final song, I Rise, was accompanied by imagery of the young students who spearheaded the March for Our Lives movement, along with the the word resist.

Read the full story on Variety.com.