In an exclusive interview with BBC News to promote the release of her Rebel Heart Tour home video and live album, Madonna talkes about touring life, changing attitudes to sex, and how she’s “exploring” a smaller-scale show in the future. Talking on the phone with BBC Music reporter Mark Savage yesterday, she explains:

I’ve done so many shows – world tours, stadiums, sports arenas, you name it – that I feel like I have to reinvent that now too.
I like doing intimate shows and being able to talk directly to the audience.
This is something I’m exploring right now: the idea of doing a show that doesn’t travel the world, but stays in one place and utilises not only humour and the music in a more intimate setting but other people’s music, as well, and other entertainment.
Kind of a revolving door of amazing, gifted, unique talent – dancers, musicians, singers, comedians, me, humour. I don’t know! Like, I’m trying to come up with all those ideas now. 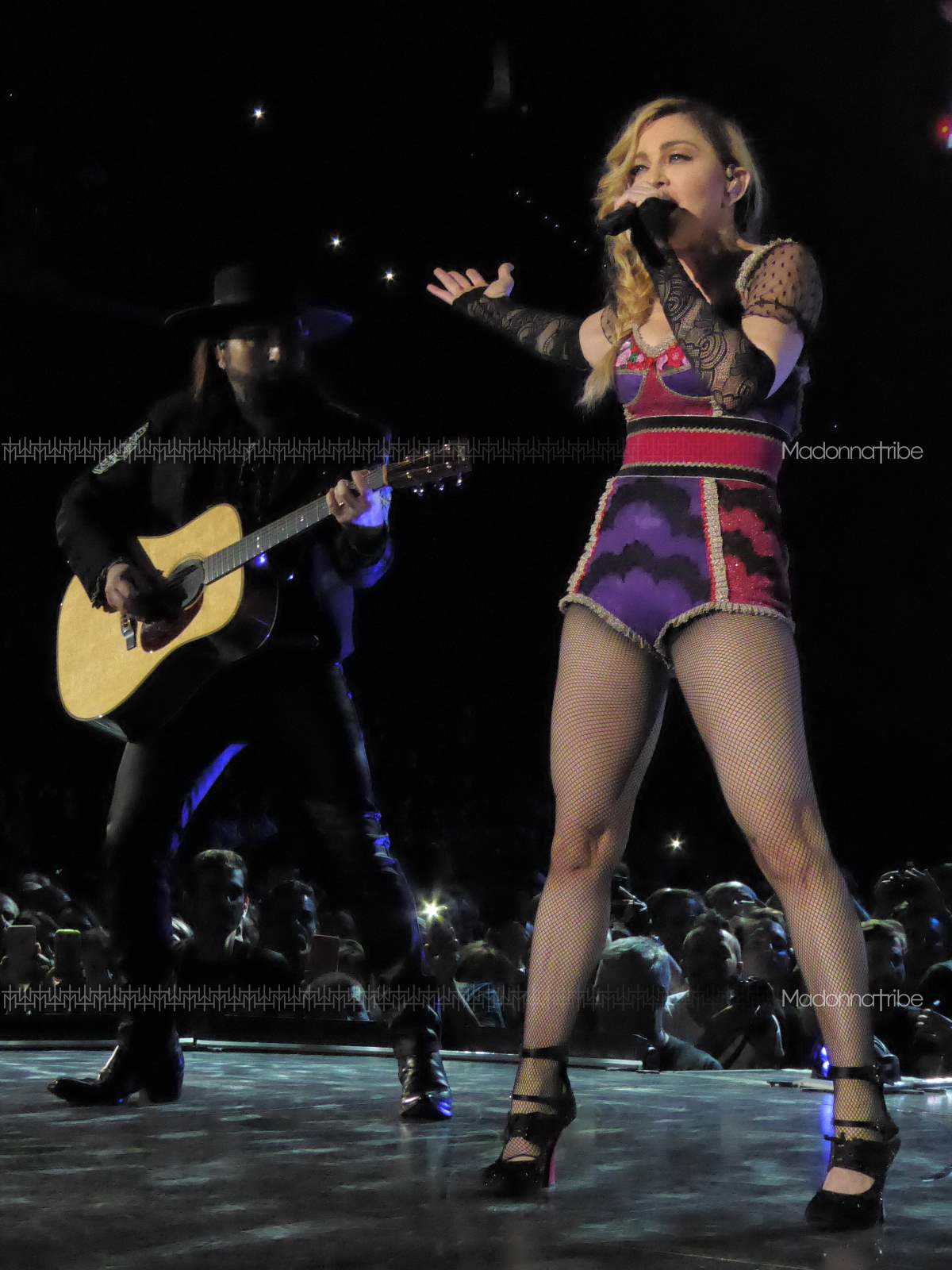 Before we start, there’s one thing I need to know: Did your FedEx package ever arrive?

Ha ha! Yes, it has. FedEx is blaming customs, customs is blaming FedEx and we’ll never know what happened. But I have it now.

So, I saw the Rebel Heart Tour when you were in London and the DVD does a really good job of capturing what it was like to be in the audience. How do you go about that?

I was there every step of the way, every day for months and months. It’s really hard to capture the true feeling of the excitement and the passion and the heat and the blood, sweat and tears. I’m pleased with the way it came out.

There’s a particularly touching sequence during True Blue, where everybody in the audience embraces each other.

I know, it’s a very sweet, emotional moment in the show. I didn’t expect it to be, but when I look back at the DVD it almost brings a tear to my eye because everyone seems so in love.

How do you put a show like this together? Where do you get the ideas?

Everything’s based around my song choice. So first, I go through my catalogue of songs with my band and I start working on things that excite me and inspire me in the moment. Some songs I’m sick of doing and I don’t want to do them. Other songs I say, “No, I did that on the last tour, I don’t want to do it again.”
So I try to rotate things and I also try to reflect my current mood and what I’ve been feeling, and what’s been inspiring me artistically or filmically, politically, philosophically. I try to put songs together in groups that have thematic connection, and then I try to tell a story. And then I do the visuals. It’s quite a process.

What are the songs you don’t want to do again?

How do you keep a healthy balance between new songs and your back catalogue?

It’s just playing in rehearsal. It’s really hard for me, especially with my older songs, to do them with the original arrangement. Because 33 years later, after doing it for so long, you just have to reinvent things. Well, I do.
And it’s fun for me to take an ’80s pop song and turn it into a salsa song, or turn it into a samba, or make an uptempo song into a ballad.

The overarching theme of the tour was being a rebel. In the intro you say, “when fascist dictators come for you dressed as righteous men” you have to rise up and take a stand.
If you were doing the tour against the current political backdrop, would that message feel more relevant?

Yeah, I created that voiceover for my short film Secret Project. I feel like it was a foreshadowing of things to come, like a prophecy.

You felt something in the air?

I did then – and I think people all thought I was being a little bit dramatic and extreme, but I felt like I was witnessing the beginning of it on the tour previous [to Rebel Heart]. And, of course, look what’s happening in the world right now. It’s pretty crazy.

Twenty-seven years ago, the Pope tried to get one of your shows banned. Now you have pole-dancing nuns and nobody bats an eyelid. Is that progress?

Is it progress? Well, I guess in some ways you could call that progress. When I released my Sex book, the idea of someone being scantily-clad on the street was an outrage. But look at social media today and it’s nothing.
People get used to things, but I wouldn’t call that progress. What I think of as progress is people becoming more open-minded, and people understanding the difference between art and exploitation.

When I was banned by the Pope, I was playing with the ideas of religion and sexuality, which are usually kept completely apart. Sex is considered a sin in the Catholic church. And I was questioning that and challenging that point of view because I don’t, obviously, agree with it.
So now that no one’s batting an eyelash about nuns on the stripper poles, it doesn’t mean that the Vatican or the Catholic church is soul-searching or investigating whether they made the right choices. I don’t think people are thinking that maybe sexuality and God don’t need to be separate. That, to me, would be progress.

The DVD also includes the Tears of a Clown show you did in Melbourne. Was that a one-off or a trial run for a different type of Madonna concert?

I like doing intimate shows and being able to talk directly to the audience; to play with them and use humour and pathos and truth, and share my life – and also make up stories. I like the freedom of it and I like the intimacy of it, and I would like to explore doing it more in the future.

Yeah, a residency. If I look back at the Rebel Heart Tour, my favourite [part] was really the last section where I got to just sit on the stage and play my ukulele and sing La Vie en Rose and talk to the audience. [It was] just more intimate. More audience participation and connecting to human beings – I feel I’m craving that more and more.

Did it feel like there was more room for improvisation in that section?

Yeah, I have freedom and I can make mistakes. That’s another thing I do in Tears of a Clown – if I start a song off wrong and I make a boo-boo, I just turn around and go “Stop! Let’s start again!”
When you’re doing a sports arena show, you’re linked up to video, you can’t stop. Once the train leaves the station, you have to keep going.
There’s a certain kind of adrenalin rush to that – but there’s no room for error. So I like the idea of mistakes and freestyling. Free-falling, really. It’s more exciting to me right now.

Read the original story on the online website of the BBC News.